This trip was a nice side adventure that isn't a part of my regular puzzle parties.  I really didn't expect to go, but after a bit of arm twisting-not too hard though-I bought a ticket and headed to the  airport.

I changed my flight because I didn't want to go all the way to Beijing for just one day.  What a waste that would have been.  I arrived Thursday  night just before midnight and Otis was a prince.  He picked me up and let me stay at his flat that first night.  It seems the hotels in Beijing don't like late check-ins.  He was even more of a prince when he let me sleep past 10:30.  I've been exhausted lately and I guess I just needed the rest. 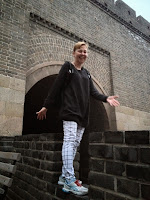 First stop was to go to the hotel and check me in.  From there we had a bit of lunch and met Da Yan and his wife.  They went off to visit an old school friend and Otis and I headed for the Great Wall.  Can you believe, 20 years in Asia and I hadn't seen it yet!  Shocking but true.  In fact, this was my first trip to Beijing.  As such, I wanted to see some touristy places while I was there. 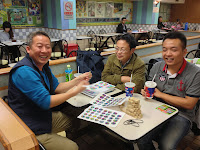 From the wall we headed back into town to go to a speed cubers meet up.  Now I'm not a speed cuber, but this didn't bother me too much.  I just wanted to see what was happening with them.  Otis told me I shouldn't miss it, and I'm glad I went.  I met a couple of puzzle designers and a few of the organizers for the G4G.  We later went to Mr. Yau's workshop and of course I had to buy some puzzles! 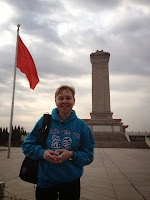 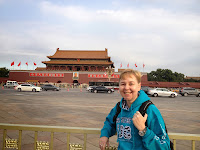 Otis and I headed back to the hotel for an 'early' night.  We got in around 12.  The next day we woke at 7:30 and headed to Tienanmen Square and the Forbidden City.  (See, Touristy things)  I wanted to see Mao's tomb, but as Otis said there were "too many bodies to see the body".  The line snaked around the block and then some. We had to be back to the hotel around 11:30 to meet Nick and Wei-Hwa so we gave the viewing a miss.  Maybe next trip.  I enjoyed the outing very much.  A friend of mine in the States said he wasn't overly impressed with it, but I've got to say, I was.  The amount of labor needed to build those structures...astounding.  I was also a bit overwhelmed by the amount of people I saw there. 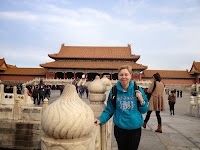 We went and saw the room of clocks.  Otis had said he'd never seen it, and I had watched a documentary on it and wanted to go.  IT was well worth the extra admission price.  I hadn't realized the Chinese clock makers were so good.  To be honest, I liked theirs more than I did those from the UK or France.  Or maybe it's just because I've seen that type before.  While inside, I got a call from Wei-Hwa saying they were in the hotel and Otis got a call from Da Yan saying he and Tom were in the square and would meet us out back shortly.  We attempted to get a cab back to the hotel, but none would take us.  Instead we got on a bus and took it to the nearest train station and took the metro instead.  An hour later we met up with Wei-Hwa and Nick and headed out for lunch.

It was a HK style restaurant, which kind of made me laugh because I went all the way to Beijing to eat home food.  Anyway, we showed around a few puzzles, Nick figured out that DaYan was THE DaYan, he worked out Tom's puzzling secret and we just had good fun talking. 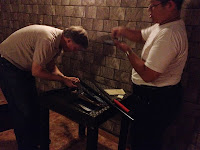 After lunch DaYan and Tom went off to the hotel, Otis went to his flat and Nick and Wei-Hwa and I went to a "locked room".  They explained what it was on the way over, and I couldn't wait to start.  To begin with, they told us to go to the bathroom because we would be locked in for an hour...and then they gave us a glass of water.  How logical is that?  We were blindfolded and brought into a room where we were told to count down and take off the blindfolds they had put us in.   Click!  I heard the door lock. 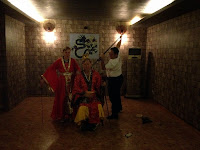 There was a video playing giving the back story of the room, and poor Wei-Hwa just couldn't keep up with the translation.  Did I forget to mention it was all in Chinese? Well, we managed to solve the puzzle with Wei-Hwa as translator and won a prize for it as well. A glass Eiffel Tower figurine. 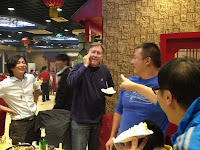 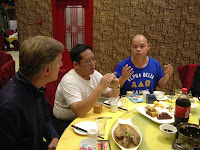 From there we headed out to dinner with the Beijing collectors group.  I was in for a huge surprise!  When I walked in, I saw friends from Shenzhen and Guangzhou.  I didn't know they were coming.  Hugs all around I tell you.  What else would I do?  As it turned out, it was one guys birthday.  A food fight broke out with the birthday cake, and if truth be told, it was Tom who started it.  There were puzzles a plenty.  I brought the Angel Box, a Stickman, Jerry Loo's cylinders, 2 burrs from Derek Bosch and a few more.  DaYan had some of his as did Tom. But I didn't manage to take a single puzzle photo.  As Nick said later, I was too busy peopling to puzzle or photograph. 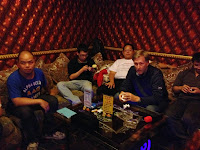 From dinner we headed out to karaoke.  A staple of boys and toys.  Well, guess who was good and plastered?  Yep, your's truly.  I don't really remember how I got back in my room.  But I know we left quite early.  My dear friend G. summed it up nicely... 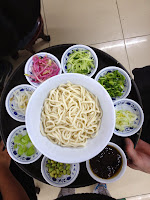 The next morning Smaz called me around 10:30 the next morning, but I was still abed.  I stayed in until lunch and then met up with Otis, Nick, and Wei-Hwa again.  We had Beijing black noodles for lunch and headed over to G4G.

There were a number of speeches all in Mandarin so of course I didn't understand a single word of it.  I stayed through Wei-Hwa's talk and Michael's as well, but then I needed to get up and stretch my legs.  I felt bad leaving, but I just couldn't stay any longer.  I was getting antsy. 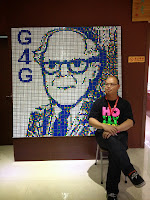 There were a number of puzzles on display that I enjoyed looking at.  There were also puzzles for sale, and of course I had to buy a number of them.  I had to head back to the airport early because of Monday morning work.

As usual, it was hard saying good by to friends but I know I will see the guys from China again before years end, and I'll see Nick and Wei-Hwa next August.  All in all, it was a great weekend.  I'm glad I joined in the fun. 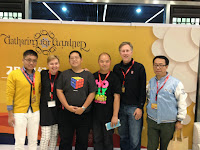 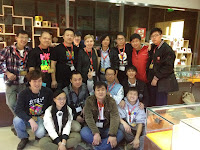 Posted by Roxanne Miller at 9:00 PM No comments:

I've been a very bad girl.  I haven't posted in over a month!  What ever is wrong with me?  Work, study, lack of time. But have no fear, I shall attempt to make up for it now.

Since I last posted, I've had 2 boys and toys but haven't really purchased that many new puzzles. (Ok, that's a lie.  I always get more, but none overly exciting.)  I'll start with the GZ open.

1 October is Chinese National day and it's also the date of the annual GZ open.  I haven't missed this since I first started going to GZ 5 years ago and this year was no exception. 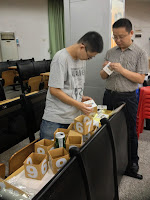 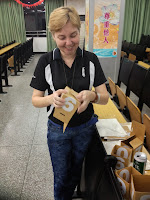 I left HK right after I finished my classes at 6 on Monday evening and spent 2 nights with the guys.  Some fool decided to jump on the tracks, so despite my best laid plans, I didn't arrive in GZ until after 10 pm.  As Ming was setting up the venue for the competition the next day he couldn't meet me at the train station.  I'm very proud of myself though.  For the first time ever, I not only made it to GZ by myself, but I also navigated the subway by myself.  I've no excuse now.  I know I can do it and the guys do too so I'll have no more welcoming committee. 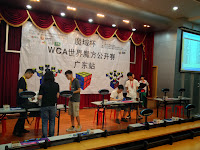 I helped to set up the venue for the competition and around 12 we headed for the hotel to sleep.  The next morning Smaz and I awoke around 10 and headed out for a bit of visiting with cubers and hunting for some gifts for our kids and a thing or two for us.

High on my list of priorities was a flask so I don't have to travel on the train drink free.  Even after having gone to China all these years, and all the conferences I go to I'm still afraid of the train and flying.  A bit of liquid courage is needed, and the flask seemed like a good solution for me.  Sadly because it was national day, most of the shops were closed.

We went back to the competition and saw a few solves, and then got ready to hand out some of the awards.  Jing Meffert was there as well as a representative from Yong Jin.  Smaz and I also gave out a few of the awards.  Standard stuff for us.  But the fun was yet to begin. 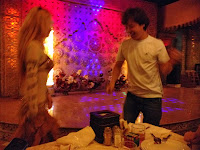 After, we all headed out for dinner together and had the usual too many drinks and too little food.  Tonight's dinner was in a different kind of restaurant.  There was even a belly dancer and Happy Angel was enticed to dance with one of the girls. 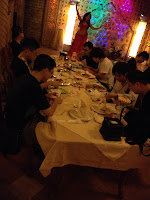 The best photo of the night though was of the guys puzzling away while the girls danced on.

This is really the reason I go to these things.  To have fun with the guys.  My friends are worth the trip.  As is usual, we enjoyed a bit of karaoke and this time the guys even got me up to sing. 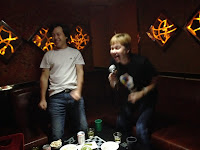 Silly Rox was supposed to go back Tuesday night, but Smaz reminded me of the cheap cost of a train ticket so I stayed overnight and spent an extra day. 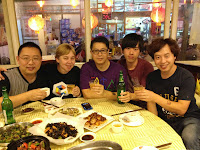 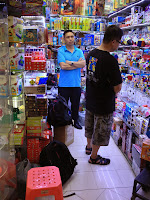 On the 2nd we went back out to do our shopping and managed to pick up everything we were looking for except my docking station for my phone.  Another quick dinner and we headed off for the train station.  We just made it and managed to hit HK before the boarder closed and the trains stopped running.  All in all, it was a great GZ trip.  (Like I expected anything less.)

Stay tuned for Gathering for Gardner in Beijing....

Posted by Roxanne Miller at 1:52 AM No comments: