You know, one puzzle I don't have is a Turkey.  I guess I will have to rectify that problem.  Maybe I can go get a puzzle and glue some feathers and a waddle to it.  Now there's an idea, DIY turkey.  Come to think of it, I don't have a cornucopia or any of the other Thanksgiving fixings.

But I do have A LOT to be thankful for this year.  I still have Mr. Man and he's still putting up with my collecting obsession.  Bug is still not into puzzles, but always helps with the crystal puzzle assembly.

I've got some amazing friends who I adore. I get to see SmaZ and his new creations on a regular basis, I meet Uwe for dinner once a fortnight at least.

I get to go on around 5 or 6 puzzle trips a year.  I love IPP and the Guangzhou parties are just a blast.

I get to travel quite a bit for work and I usually manage to make a few puzzle purchases and a side trip to meet a fellow puzzler or two.

I accomplished a dream by mass producing my own puzzle.  (and if my luck holds, it will be at a local attraction in the spring.)

I get to read Allard's and Kevin's and Gabriel's and Jerry's and Brian's  and Neil's and Oli's blogs.  That keeps me looking for puzzles to purchase, and others to drool over.  All of them write so much better than I do, so if you haven't read their posts yet, go do so today!

Oh yes, and I got a few new puzzles this year....a few hundred that is!

Yep.  Life is good.  I have a lot to be thankful for.  I hope you take the time to sit back and think over your puzzle blessings.
Posted by Roxanne Miller at 10:37 AM 2 comments:

It's a small world

I know people say that, but really, it is!  I have proof right here! 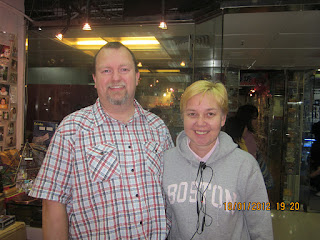 Apparently I know this guy.  Ok, so here is a story for you.  At IPP last August, we took this boat ride.  Katherine being herself got bored and decided to go bother people.  Me being me went hunting for her.  She found this little guy that she thought was adorable and began chasing him around the boat.  I'm not sure who enjoyed that more, him or her.  So IPP is over and we all go on our merry way... 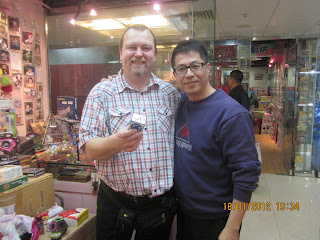 Fast forward 6 months and enter SmaZ's shop. It was one of those days.  I spent a good 3 hours in a meeting, fielded around 70 emails about wiki being down-at least 50 came from one rather um....challenged....young person who couldn't find the library even though it's right in front of you when you enter the campus, and when he did find it didn't know how to use the card catalog, even though it's on line, dealt with some puzzle nonsense that I'd rather not deal with, and Michael asked me a question.  Well that was all it took.  I was on a Rant!  A long winded rather vocal one.  And all the while the man in the photo above is standing in the shop.  I paid no attention until he asked a question about a cube.  And there you have it folks.  Rox sticking her foot in it again.  Well, he stayed and chatted for a bit.  Solved a mimi puzzle, played with the washer cylinder and discovered a little something I hadn't (still not solved though).  SmaZ gave him a gift of a puzzle, and he purchased a dino barrel and left to go back to Denmark.  Talk about great timing.  Things like this just don't happen do they?  Ah, and go take a look at his webpage.  A bit of eye candy there, that's for sure. 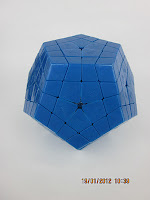 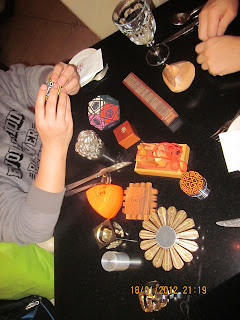 So why go to SmaZ's in the first place?  My friend Otis is in town for the holidays and we agreed to meet up over there.  (I'm sure he'll come to the house and play for a while next week, but we had some puzzles to swap out with each other....) After we met at 6:30 or so, we stayed a Michael's for a few more hours before heading out for dinner.  As always we each brought a few puzzles along to play with/brag on so out they came during dinner!  Otis brought that beauty of a TomZ puzzle with and I quite enjoyed twisting it around.  Lots of puzzle talk, lots of playing, one unsolved as I left, and no puzzles harmed during the night!

And now for the real reason to get together last night.  Puzzle exchanging! 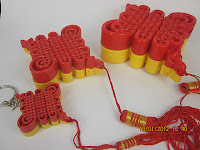 I gave Otis my 'springtime in Wisconsin' and a puzzle monster.  I think he liked them.  If not, he smiled nicely.  He brought me a set of 6 dice boxes from mimi puzzles that Gabriel blogged about, and that I can't get locally.  Surprise, surprise, he ALSO brought along a BLUE puzzle for me, and 3 chinese knots.... 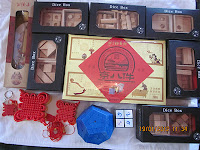 Michael and I did a bit of swapping as well.  I got one of his new Soduko cubes, and gave him a Oskar's treasure chest.  Yes, I'm generous like that.  Don't tell on me though.  I'll get in trouble.  The full set of what I brought home is to the left.

Now when I got home, I had another surprise waiting for me!  I picked up the mail and inside was a late Christmas gift from my friend Charlie!  I thank you so very much.  A nice job it turned out to be.  And how ever did you know that blue is my favorite color????  Thank you again my friend! 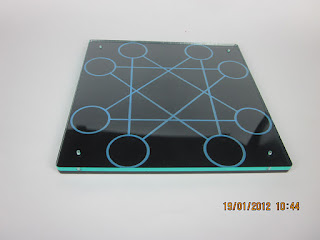 reviews of these will all come eventually.  In the mean time, I have this thing called a job that I'm supposed to be doing, and I've got about 10 minutes to cut off my time so I need to get back out and get working a bit more.  I can't let a person 10 years my senior beat me in the next race, and as it stands, if I don't start moving and stop puzzling that's exactly what is going to happen.  Have a great weekend all!  And in case I don't get another post in before Monday:
新年快乐
Posted by Roxanne Miller at 12:44 AM 1 comment: