The pressure is on! Pionir cube and Disney Pins.

Yeah, so I'm not done with that darned paper I need to finish, but according to Kevin, my updates are awaited with bated breath....seriously?!?  People read this drivel I post?  Right, but ok.  I'll bite.  And just for you Kevin, I'll take a moment and type up a little something on one of my all time favorites.  (besides, I really do not want to write it so any little excuse to put it off....) 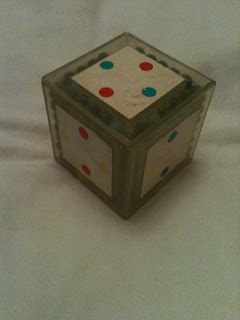 This is another puzzle that alluded me for a long long time. I finally managed to get a rather poor copy of it about a year ago from an eBay auction. The pionir cube has a total of 67 balls inside, 55 of which are black.  Mine has 4 each of green, red, and yellow balls. There is one space with a missing ball, and the object is to match up the green, red, and yellow balls with the corresponding color pips on the stickers that are on the side.  As a puzzle, it's not that difficult.  You just roll the balls around until you luck out and match up the colors.  Oh, I'm sure someone out there will tell me there is really a method of solving this that requires the memorization of a variety of moves, but I prefer dumb luck!  The beauty in this puzzle is in it's relative rarity.  It isn't all that often that these come up for sale, and when they do, they seem to have the stickers missing, or they are just a bit pricey. 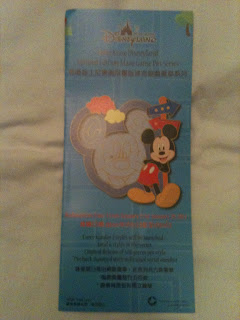 Now tonight, you get two for one.  See, I have another little thing that keeps me happy on rare occasions.  Disneyland!  We live two train stops away, and it takes all of 10 minutes to get there from the house.  So guess who bought annual passes for herself and one bug? Well, sadly this stupid paper that I am really procrastinating over and too much paid work has really limited the number of visits we have taken together over the past few months.  But Valentines day found me once more in the park with a dear friend of mine from Florida (another Disneyphile).  Well, there is only one thing that makes  Disney more fun than Disney and that is puzzles at Disney. 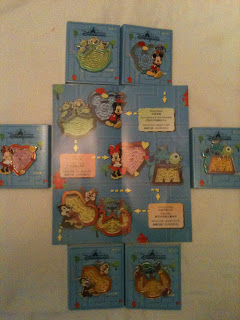 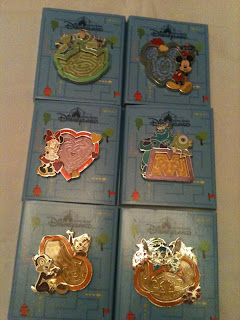 Disney has been a bust for puzzles for a while, but I get my fix from that same Floridian, he's a Flight attendant for Delta and has passes to all the parks, so when they get a new puzzle; so do I!  Yesterday, when we were strolling around the park hunting for Christmas pins, we found a new set that I hadn't seen before.  A really nifty set of pins that are mazes too!  The little balls in these things are tiny!  I found these in the Main Street Emporium, but sadly they only had 4 of the 6.  Not a problem for us.  We had a mission!  6 hours of walking later, we found the last two and I nabbed me a new set of 'puzzles'.  A bit expensive at US$10 each (give or take), but who cares, it's only puzzle money.  And seriously, how many can say they have a maze pin?  I also found and purchased a twisty Toy Story Pen, but in the rush to separate purchases on the train as we were leaving, it seems that my friend took that one home to Florida.  Not a big deal, it just gives me an excuse to go back over there again sooner than I had planned.  Maybe when the bug is feeling better...
Posted by Roxanne Miller at 8:07 AM 3 comments: