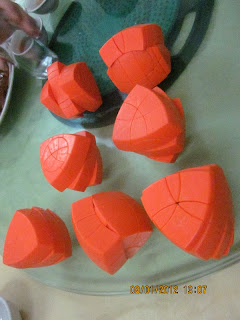 So Da Yan had come from a factory in the south part of the country and had a bag full of goodies.  What they were is anyone's guess.  He pulled out these orange pillowed pyramidically shapped things that look well...orange.  I think initially he had around 11 of them and as the day went by his stack got smaller and smaller.

By the time we all got to dinner there were only 5 left.  I saw two that looked "normal" the rest were variations on the planet theme the duo have been producing.  After foolishly posting on TP that these had the normal 6-armed core, I was told else wise.  So I took mine apart during the video I did and yep, I was wrong.  It is only a 5-armed core.  I am pretty certain these are not the final color of this puzzle.  See, when they make samples, the molds are placed in the machine and whatever plastic is there already is what is used.   Da Yan and i had an interesting conversation about colored plastic puzzles vs. Solid colored puzzles.  This is a DejaVu thing for me now. Now I know I have written this else where but I will repeat myself.  For the "crazy/planet" puzzles, some of the pieces a just too small to sticker.  Remember, the stickers all go on by hand.  So it saves a lot of money and manpower to do the multi colored plastic.

As always happens at these things, one topic blends into another and we were next talking about how to sell the puzzles.  It seems that the planets-all 8 of them in what? a dozen different versions now? Don't sell as well as they would like them to.  When asked why I don't have all vsions of the Bermuda cubes for example, I just said it is pointless for me now.  I collect.  Not solve.  Too much money for just the same old shape, different solution. (see, I DO have some willpower and say NO on rare occasions)  I suggested a kit that can make all the versions at 3-4 times the price of an individual cube.  The company makes a bit if money, the customer/puzzler is pleased because they have variety at a slightly lower cost...to me, everyone wins.  We'll see.  If it happens, remember-my idea! :-) 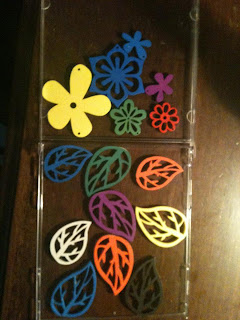 OKOk, so Da Yan showed his toys, and SmaZ pulled out. Time machine or two and some mini time machines.  I had my "springtime in Wisconsin" on the table and hard eight/easy eight out as well.  It was a rather puzzling lunch.  Then Tom pulled out a bunch of washer cylinders that were being passed out and the next thing I knew 3 hours had passed!  Back to the hotel to pick up the morning purchases, and over to another puzzle seller in GZ.  This stop was a quick in and out before heading back to the hotel and rushing off for the dinner.

Dinner.  I've not worked out why people eat the food they do.  I simply cannot stomach the idea of eating ofal.  There is just something not right with that.  But hey, to each his own right?   Now my friend SmaZ has worked out what I can and cannot (or will not) eat and every now and again he'll lean over and say dont eat that.  It's like having my own personal taster.  Ok, so why so much talk of food? Well because this was an anniversary DINNER! And I give you a montage of the food: 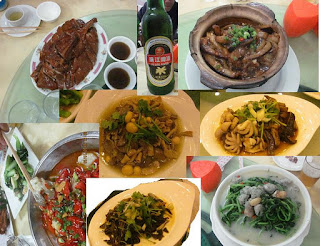 Ok, dinner wasn't all about the food.  It was more about the company and the puzzles.  The tables were full of food, but they were also full of toys! I think very person there brought at least one.  Most of us brought 5 or more to pass around.  We twisted and turned and placed and groaned and shouted for joy when we got it all worked out.  The reason for this get together was the 8th year of the Mf8 forum being live online.  AND 8 years worth of modified puzzles on that forum.  What happened next kind of surprised me.  I was expecting a competition of sorts, but rather it was an exchange.  Each of 8 builders names were put into a hat and Da Yan drew them in pairs.  The two builders then exchanged puzzles with each other.  A very nice thing to see happen.  Different, but nice.

Next up were my puzzle monsters, and since SmaZ, Ming, and Mr. Fok had already seen them, they suggested we play a guessing game. I.e. Who is this one.  It was quite fun.  Leslie was guessed with the mini tuttminx; SmaZ with the hammer, and a wild stab was made at Mr. Fok's.  I explained the stories behind each as they were handed out, and the laughter I was looking for was had by all. 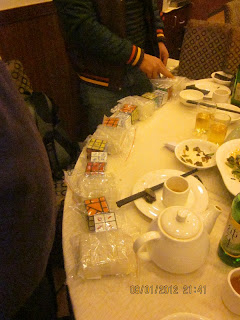 We then went on to a give away.  Mf8, SmaZ, and Da Yan all chipped in puzzles and everyone who attended left with a new toy (in addition to a monster :-) ) the funny thing was, no one got a puzzle they already owned.  I drew 12 and got a Mercury bermuda cube.  AJ was sitting next to me and was pleased as punch to draw a 3x4x5.  Tom got a Bermuda, and to be frank, I was so far into my cups by that time that I can't remember who got what-and before you call me a lush-remember, I don't eat ofal and add to that seafood allergies and for me only the beer was really safe.  (it's nutritious isn't it?) well, that was it.  The next thing I knew, AJ was passing out the starfruit and we were all heading out the door.

Next stop: karaoke. Now that was a laugh, and I'll just say they did it.  They finally got me to sing. (must have had more beer than I thought). 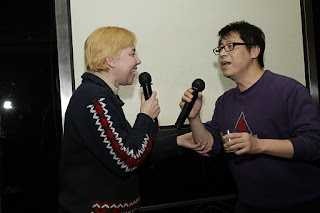 We were kicked out at the 2:30 or there abouts closing time and it was off for a bit of late night eating China style.  Noodles, fish, seafood congee-and of course more beer!  Me? Well nuts, I was starving.  Alergies be damned, I ate the congee, took the shot and passed out.    Everyone has their breaking point and mine is definitely 4 a.m.  When I was called about a lost ticket-I wanted to kill my friend.  Yep 4 a.m. Is my cutoff point. 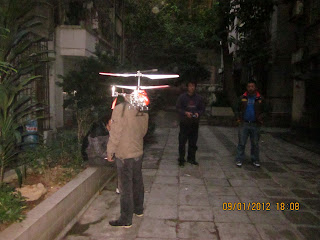 The next day I got a call from SmaZ to put my luggage in Da Yans room and off we went in search of toys for our children.  Seriously! The kids ended up with mire toys than the adults.  Tom bought squeaky things and stuffed things and flying things and dancing things for his daughter (and you thought bug was spoilt-toms little girl is only 3 months) a really cool transformer was purchased and a couple of helicopters.  Lunch was another three hours and then one last trip to say goodbye to Mr. Fok.  While there we decided to fly those helicopters we bought.  What fun! smaZ was able to get them to go very high.  And then, Leslie had a go....disaster.  It went high alright, right into a tree.  So now we have 5 adults staring up at this flashing light in the tree.  Da Yan is the tallest of us but he was still about 3 feet short.  After pondering a few more minutes some one said something silly and Tom and I lifted Leslie into the tree and we got the toy back.  (He is super tiny! He might have had a great career as a Jockey were he from HK). We said our good byes and went back to eat dinner and get the luggage. 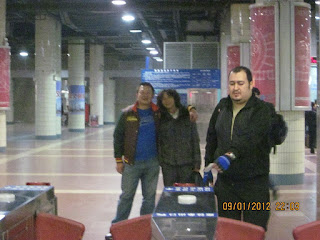 Now this next bit impressed me.  When I have been to other puzzle parties, you give a hug goodbye in the lobby of the hotel and be done with it.  Not so in Guangzhou. Over there, the entire party gets on the train with you and they deliver you to the main station!  It's always sad to say goodbye, but even sadder when your friends are on the opposite side of the gate waving at you...until next time!

(And no, I don't know the big man in the foreground-he wasn't with us.  Just some random person who ruined my photo.)
Posted by Roxanne Miller at 8:50 AM 3 comments:

The life of a puzzle gal

This evening it's off to Guangzhou for what I have affectionately called my "boys and toys" weekends.  Want a funny?   That phraseology started because of a really dumb song with a catchy beat.  Bug was playing it non-stop when I came home from a weekend.  She started teasing a rather green mother and that song was doing my head in.  My tormenting here with Amy Winehouse didn't help any and the next thing I knew, in a 9-year-old kind of way she changed the words and it just fit.

So Guangzhou.  I'm really chuffed today.  I'm going through this training thing and then it's a run to the station to meet my pal SmaZ for the ride over.  See tomorrow is the 8th year that the Mf8 forum has been running so friends are coming in from all over the country to celebrate. (we don't need much of an excuse to get together and celebrate here) 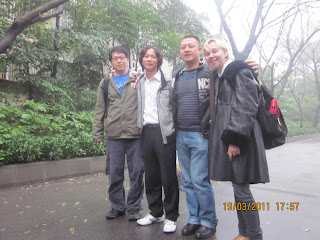 SmaZ, Tom, DaYan, Rox. We also have AJ, Ming, Mr. Fok, Witeden, Cubetwist, and a few others that come along.  I'm not sure if there is a competition this weekend, or if it's just an excuse for all to get together and have a good time. I've been told there will be Karaoke and beer so YES I said.  There's nothing like watching DaYan sing, and I've heard tell that Tom is just as good....Seriously though, it's all business when we go. No fun, no games....(yeah right!)

We'll come back on Monday the 9th when we can crawl out of bed...or rather when we are rolled out...or tossed out whichever comes first.  And then it's straight to the HKTGF (Hong Kong Toys and Games Fair) It runs this year from the 9th through the 12th.  My dear friend Dr. Panda won't be there this year, but I've got V-cubes!  Who would turn down the opportunity to spend 3 days with Konstantinos?  Now THERE is a boy!  :-)

The fair is great fun. I run around and look at what's available, grab a few puzzles for my collection, say hello to some old friends. Drop in and get the Annual Tangle...And work the v-cubes booth.  I enjoy Konstantinos' company.  He's a great lad to be around.  There's this twinkle in his eye that matches my inner imp perfectly.  With that combination, it's bound to be fun.

With that kind of a week, I just know I'm going to pay for it for the rest of the month.
Posted by Roxanne Miller at 11:00 AM No comments: