On the Eleventh Day of Christmas

My true love gave to me
Eleven Cartoon Puzzles 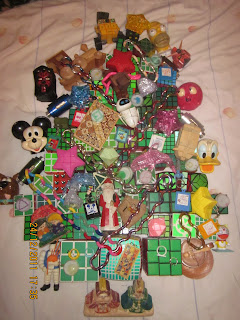 Today we have a variety of different 'heads' and 'figures'.  Starting at the top we have  WALL•E .  I made this little beauty all by myself using a cube4you 3x3x3 and a you build it WALL•E figurine I got from Toys R Us when the movie first came out.  To the right is Homer Simpson. Homer was purchased from Hessport's Rubic's shop way back in 2001. Next up is a Gundam 2x2x2 puzzle head that was made in 2003 by Palbox, formerly known as Tsukuda Original, which later changed its name to Megahouse.  Oh my the twists and turns of the toy industry!

On the left we have is Darth Vader. Another from Hessport's Rubic's shop.  This time made when the movie came out.  (I know his price was US$9.99 because I have another still in the shipping box under my bed.)

Morph was a McDonald's giveaway when the Disney movie Treasure Planet was released in 2002.  He's a 1x2x2.  The puzzle there is messing it up, not solving it.

Eve is my own creation and probably the ugliest puzzle on the planet.  She was made because Tony Fisher told me I could use man tools.  Boy was he wrong!

Mickey Mouse and Donald duck were made by Volzaper in Spain and sold by Meffert's since 2001-2002.  Mickey Mouse is still available.  (and no, I don't mean the cheap made in China version, I mean the original one.)  There is also a Scooby Doo puzzle there made by Meffert's under license from Warner brothers.

The next is a Doreamon jigsaw puzzle that was a give away from 7-11 this past year.  There were a total of 8 in the set. Typically I got 7 of them.  (I'm missing one of the Gundam set as well-and if anyone knows where to find Zaku....)

The last is a put together Michelin man.  This one is from France, and was purchased on an ebay auction.  I'm not sure what year they came out, but I did see them not too long ago for sale at a table in a puzzle party for over US$70!  I think I'll keep him for a while longer.
Posted by Roxanne Miller at 11:01 AM No comments: