While the majority of my puzzle friends are dreaming of sugar plums, I've been puzzling the day away.
Santa was all right. But I would have to say, Christmas Eve present opening was much nicer! Thanks to a silly bug I had a few more presents under the tree than I expected. 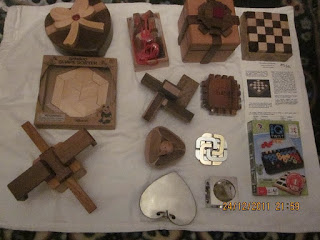 So there are a lot in there from Bits and pieces, and a few from Eureka, a Smart Games, a Karakuri, and one from the Juggler.

Now while any and all of these are pretty neat, I would have to say thus far, my favorite has been....oh don't hate me....Oskar's Matchboxes. :-) There is just something mesmerizing about the way those blocks come apart. They have this sliding motion to them that is just plain fun to watch.

Solving wise. Well, the configuration it is in when it arrives is easy to do. I've managed that with the cardboard set I made a while back. Now I've seen somewhere that there are 2 more solutions to this puzzle. I guess I'll have to spending bit of time giving it a think.

What? Not fair I hear you scream out! I shouldn't like a toy I already have? Ok then, this time I'll agree with you.

I'll be serious then. I like all of them and will post later on each of the other puzzles I received, but first. I want to talk about Neil's Unhappy Childhood.

I saw this one and was taken by it. Why? I'm not entirely sure. It's a 5x5x2 checkerboard. Maybe it was the pretty wood. Maybe it was the poor finger. Or maybe it was a temporary bout of the "I think I can solve that" Well, what ever it was, I now have that puzzle in my possession. and it is pretty.

Upon closer inspection, there are 10 pieces each with 5 cubes. The puzzle is simple. Put it back in the box so that there is a checkerboard pattern on both the top and bottom layers. So is it possible? I've been told, but after about 2 hours on it today??? I'm beginning to wonder. And for all you naysayers who think I never muck up a puzzle that is difficult to solve... 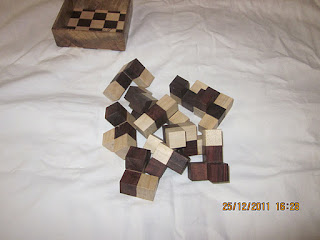 Nice of Mr. Coffin to make another devil of a puzzle. Nicer of Neil to remake it. I won't bore you with telling you about the way it was made or anything like that. I've A major snowstorm brewing in my bedroom right now that I need to put an end to. I'll just say I love the box the puzzle is in. Very creative. I wish I knew what the smell was that is in there. It's not the wood that is for sure. And I'll leave you with a link to Neil's page on how he built this thing.

Oh yes, and for those of you who are wondering, there is no blood to be found.
Posted by Roxanne Miller at 3:46 AM No comments:

Now come on, be honest. How many of you are counting down the days with me? Now be honest, you know you are. And why? because you just know there are puzzles hiding under that tree of yours. That are all wrapped up in pretty shiny paper with bows and ribbon on the top. If yours are like mine, they are calling out to be opened!
And if you are like me, you have a pretty good idea of what is in those boxes. And if you're also like me, you are waiting for just a few more to come in.
So what's under your tree then? Do tell.

No peeking? Awe shucks. Well, I'll have to look at a puzzle then that I already have in my collection. On the way into a focus group interview at work today (can you say waste of time) I grabbed a puzzle. Todays was a karuakuri box. One of the little ones. Number 4 to be exact.

What a nifty little toy. When I first pulled this one out of the plastic, a little card fell out. Now I have a feeling this is the solution and since I didn't want to spoil the fun, I left it on the floor with instructions for Miss. N. to pick it up and hide it on me. So upon first inspection, I noticed that the base slides in and out about 1/4 inch. hmm me thinks. This might be easy. Upon closer inspection, that little movement seems to be all it does. So much for that idea. I can see seams around the puzzle, and I've noticed a bit of movement in another place....Let me give it a think....a bit of frustration and around an hour later.....

As Mr. B. says, give your head a shake Roxanne! This one was so simple it isn't funny. Ok, and sore hands too. But it is now solved. A fun little puzzle. Worth the price I paid? Probably. It had me stumped for a while (but then it doesn't take much does it?) 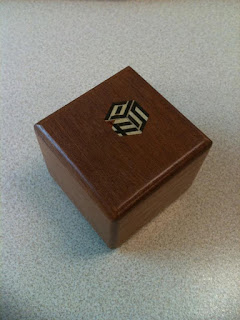 Now back to waiting impatiently to open those boxes under my tree....
Posted by Roxanne Miller at 9:15 AM 3 comments:

Ok, so maybe not part 2 but the real Christmas list. When I was younger, I was Thrilled by going through the JC Penny's catelogue each year and circling what I wanted for Christmas. I remember one year I circled this thing called a CRACKED marble menagerie . My mom said absolutely not, and in the run up to Christmas that year I was the saddest girl in town. Imagine my surprise on Christmas Eve when I was handed a very noisy gift by my mom! Well, it was straight into the kitchen to boil those marbles for me. Forget the rest of the gifts....

Well, that's a bit how I feel this year again. My husband has decided that he will just give me money. But he's stipulated that it MUST be spent on toys. :-) Does he know me or what?

So what's on my Christmas list then? Well, I'm a simple gal really. I don't ask for much. Silly as it sounds, I want a Hanayama Donuts. (No, I haven't got one yet. There is nowhere in HK that sells them, and to buy one from overseas...I may as well wait until next summer) I guess those are around US$12 give or take. They also have some really neat new puzzles! Oh I want those too.

I want some SmaZ dino cubes-8 of them to be exact. I want a mass produced version of each handmade he has made for me. (hmmmm. Maybe I should write a page about him one day)

I'd add the Mf8 kilominx to the list, but since I've already ordered it....I guess I can't.

I'll add a few Karakuri boxes to my list. The egg is one I saw in Japan 2 years ago, and I'm sooo tempted to toss away my list and just go for this one, but then...I wouldn't have enough money left over for the dice box that I foolishly didn't make that same year. Maybe the rest of the small boxes would be good too.

Now, if I could find a real jugo flower, I would love that, but since I already have one of Wil's versions, I'll not hunt too hard. But as long as I'm talking about Wil, I have heard he makes some pretty cool bolt puzzles...

I'm wondering what is left to collect. I have almost every twisty puzzle made~ok you nay sayers, I just haven't gotten around to posting videos of everything I have. Or maybe I should say I have what I set out to get. That sounds so much better. No, most of what I set out to get. I am still missing that Gundam Zaku puzzle, and the pudding dog and hello kitty heads but other than that...Oh I'm sure I'll be able to find more if I look hard enough.

But what I really really want....is a bigger house to store all these toys in!
Posted by Roxanne Miller at 7:25 AM No comments: