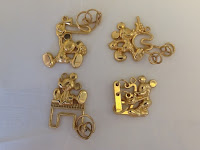 Today I decided that I'm going to post about a set of puzzles no one else has talked about yet. I also got to thinking of my friends and decided I'd tempt Kevin a bit more...eat your heart out my friend.

Next to puzzles, Disney has got to be my next favorite thing. I know I've said it before, but it is so true, and when I can combine Disney and puzzling together, I'm one happy camper!

Another thing that makes me happy is finding an old puzzle and playing with it again. It's like Christmas when I open my bed, or a drawer or a cabinet I haven't opened in a while. This morning was Christmas. Last night Uwe asked me to measure some puzzles for him (yes, I have man tools and now know how to use them.) and I rediscovered a set of puzzles I haven't seen in a while.

This set was made by Kawada in Japan. I managed to pick them up quite a few years back now, and while they are no real challenge, they are Mickey Mouse and you can't go wrong when the two are combined.

There are four different puzzles here and each is really just an old puzzle with a Mickey Mouse theme. Mickey set to music. Kind of reminds me of the philharmagic, or fantasia. I wonder if that is where the inspiration came from.

Solving wise, these puzzles took less than a minute each if that. They are such an old puzzle as the base. These are the ones my grandfather gave me so many years ago. Not the Mickey bit-the puzzle. 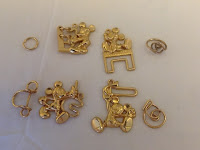 If you can get ahold of these, they are worth it for the characters. My only complaint? The keychain bits rusted through and had to be tossed away. I don't like rusty fingers.

On the Tenth Day of Christmas

My true love gave to me
Ten Dexterities 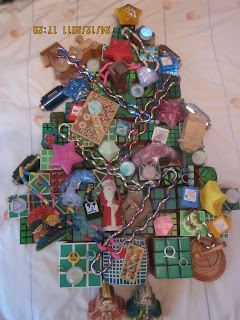 
Nothing overly exciting here.  These are from two different sets of key chain dexterity puzzles.  One set was purchased at one of my many visits to the Cubetwist warehouse.  While the other was from an unnamed site.  Half and half I would guess.  The second set was yet another give away from drinks, but this time I didn't drink them.  I ended up purchasing them only to have them arrive in HK and find out it was the same set I already had...


Now in the past, I've had complaints from one in particular (who later dropped the ball big time I might add) about not being as creative as other posts might have been and I realize this falls into that category and anyway, we finish what we start now don't we.  But look at that tree. It's full!  If we add any more puzzles to it, it will tip over.  Oh wait, it already has.  It's laying on the bed.  :-)  All will be revealed on day 12.
Posted by Roxanne Miller at 11:01 AM No comments:

On the Ninth day of Christmas

My true love gave to me
Nine Tiles Sliding 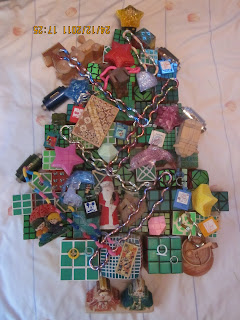 
The slide tiles on this tree are all keychains.  On here you can see a lovely set of five puzzles from Hong Kong Disneyland that were all purchased for me by my bug with her own money. (can you say proud mama?)  These include Mickey, Donald, Minnie, Pooh, and Stitch.  The small greenish Donald Duck is from Tokyo Disneyland while the greenish Mickey Mouse is from  Euro Disney.


The puzzle at the base of the tree was purchased with a large lot of puzzles from our favorite auction site, and depicts L'il Abner.  It was made by picto puzzles and is highly distorted and warped. The puzzle was completely unsolvable when I received it.


The last puzzle was a giveaway from Japan.  It is one of a set of 5 different puzzle types given out by Suntory on their product Dakara.  This is essentially a sports drink, or a vitamin water (you choose)  Good for hangovers and sold on occasion at both Sogo and City Super.

Ok, so you think it odd that I give links to a department store and a supermarket that the majority of readers will never go to right?  Well there is a reason for my madness!  These two places also sell puzzles!  Not just the kind that are attached to bottled drinks either.  They sell puzzles that real people solve.  Puzzlers and non-puzzlers alike.  The majority of my foxmind puzzles came from Sogo, while many of the Hanayama Disney Crystal puzzles came from City Super's log-on.  You just never know where a puzzle will show up.

Posted by Roxanne Miller at 11:01 AM No comments:

I have this wonderful relationship with Tony. He makes great puzzles, I buy them. :-)

Tony has been around puzzles longer than I have, and as much as I'd love to say I have all of his, I simply don't have enough money!

For those of you that don't know, Tony makes all his puzzles by hand. He has some interesting ideas and even more interesting ways of making them. Tonight I'm going to show you his mini golden cubes. 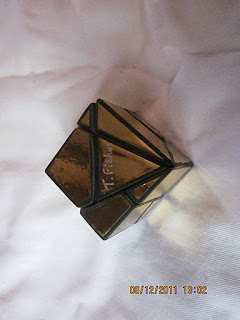 This one is a nice little cube. It's made from the Meffert's skewb keychains. I'm not exactly sure when he made this one, but you can see a nice history of them on his page here. This is one of the puzzles he has had mass produced by Meffert's in a much larger size.

Now this one is a bit of a headache to solve. It has a number of oddly shaped pieces attached to the skewb. When solving, it is not just a matter of getting the colors to the right side, but moving the pieces around to the right orientation. A royal pain in the ... But fun to attempt anyway.

Tony did warn me that the key chain versions have this tendency to fall apart. Since mine has a pretty signature on it, I've not mucked it up so my solving experiences comes from the Mass produced versions. (And yes, I have the whole set-2 sets in fact, with an extra copper one that Uwe signed for me-oh dear bragging again.)

I also have a sliding puck, and the first I ever purchased from Tony was a nesting Dogic. My photograph brainbox is acting up (as usual) and the camera is packed in the suitcase so sorry, no photos of those two unless I can get that darned thing to behave itself.

Well, I'm off for a 'working holiday' Seriously this time. I work for 15-20 minutes and the rest of the week is holiday. (And listening to others) But the highlight of this trip for me is not going to be hearing myself speak, although I never tire of that, but meeting a group of puzzlers while there. My bags are packed, but more importantly the travelling puzzles are packed.

See you all after the weekend.
Posted by Roxanne Miller at 10:12 AM 1 comment: